Famous Four are manufacturers and suppliers of tailgates and associated parts for Classic Range Rovers of all model years 1970-1995. All of these unique to Famous Four products are designed and manufactured in the UK.

This guide provides a detailed explanation of various changes and differences in tailgates fitted to all model years to help identify which you require. If you are still unsure contact our expert sales team at:
info@famousfour.co.uk

The original 1970s design featured an outside handle which is moved sidewards to lock and unlock the tailgate. This external handle was fitted to all vehicles up to November 1986 (up to and including CA chassis numbers), when it was replaced by an internally operated handle to open the tailgate.

We offer two different lower tailgates for the pre-November 1986 vehicles with the exterior opening handle.

The majority had a 'drop-down' hinged rear number plate (licence plate) plinth fitted, and a pair of glass and metal bowled number plate lights FF002532 were fitted to the plinth. This plinth was held to the outer skin of the lower tailgate with two plastic push-in clips FF010237.

All vehicles built before June 1984 (all pre-BA chassis numbers) should have this arrangement, although many have been replaced over the ensuing years for later tailgates. Don’t worry if your pre-1984 Range Rover does not have the drop down number plate plinth; later tailgates will fit, if used in conjunction with the appropriate hinges and strikers.

For the pre-June 1984 lower tailgate which uses the drop down number plate plinth order our part number: FF010379

Vehicles built from June 1984 to November 1986 had a slightly different lower tailgate, still with an externally operated handle, but without a drop down number plate plinth – the rear number plate was mounted directly to the outer skin of the tailgate – and plastic number plate lights FF001903 in place of the earlier metal versions.

For the June 1984 to November 1986 lower tailgate which still has the external handle but NO drop down number plate plinth, order our part number: FF010400

In the 1990s Land Rover UK produced and sold a version of the lower tailgate with external handle. They were sold to owners of vehicles with tailgates that needed to be replaced and, when fitted to replace a rotten or damaged original tailgate, would also require the replacement of the tailgate hinges with the later style ones as fitted to later tailgates (such as FF002057). These were never originally fitted to production vehicles, and if you have one of these fitted to your vehicle now, and wish to replace it with a new tailgate which is correct for your year, you will have to source a pair of the correct original type hinges. These tailgates are easily distinguishable by the shape of the pressing around the hinge bolts on the inside corrugated section of the tailgate. We do not manufacture a version of this tailgate, as it was never a production fit.
See images:

We also offer two different lower tailgates for the November 1986 to 1995 vehicles with the interior handle.

The introduction of DA chassis numbered vehicles in November 1986 saw a major change to the lower tailgate design, when the opening handle moved to the inside of the vehicle, and it remained like this until production of the ‘Classic’ Range Rover ended in 1995. We offer two different tailgates for the post November 1986 vehicles with the interior opening handle.

Our part number FF010377 suits all vehicles from November 1986 up to October 1989 (DA to end of FA chassis range), and used the same hinges as all earlier vehicles (half moon pressing on inner skin around lower hinge bolt), but had an inner handle.

The design of the bottom corners of the lower tailgate was significantly altered from October 1989 (GA441003 chassis number onwards) to improve the fit between tailgate and body frame in an attempt to reduce water and dirt ingress. The lower corners were shaped to fit the revised rear floor shape, and a weather seal was added to the end lip of the rear floor, onto which the tailgate closed. The shape of the pressing around the lower tailgate hinge bolts was altered at the same time, and it is clearly distinguished as a rectangular shape with rounded corners.
See images:

If you have this later (and very last incarnation) tailgate, you will need to order our part number FF002057.

We also manufacture the correct stick-on decals for 1979-1992 tailgates, the correct ‘by Land Rover’ aluminium oval badge for pre-1979 vehicles, as well as supplying most other fixtures and fittings for the lower tailgates.

Originally manufactured in mild steel, top tailgates were prone to premature corrosion from new. Here at Famous Four we have perfected the design and manufacture of replacement Aluminium framed top tailgates, offering you an improved, UK built, long lasting corrosion-free upgrade for your Classic, which is virtually indistinguishable from the original when fitted. 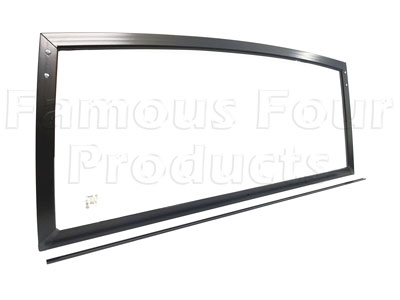 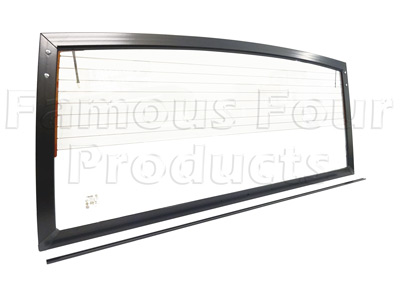 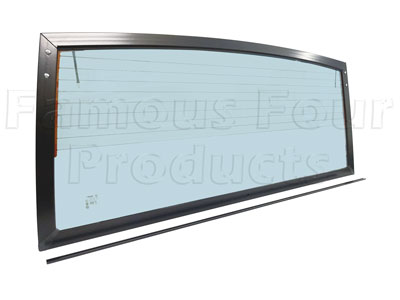 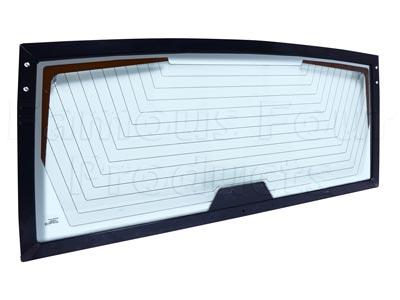 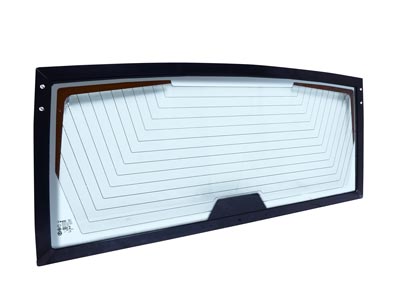 In addition, we also are sole UK manufacturers of the horizontal seals which fit to the lower edge of the upper tailgate, both the early thin style, and the later improved thicker version, fitted to 1984 and later vehicles. We also stock hinges, side catches, handles, link rods, and struts to ensure you have everything you need to finish your Classic tailgates to better than new standards.